Our apartment has a wall heater that we have to use in the winter because we get no sun at all. It is gas powered and the pilot light goes out constantly. I find myself shivering on the floor most mornings with a lighter in hand lighting the pilot because nobody in our house will get out of bed unless the heater is on. The access panel and pilot are at the bottom of the heater and I find it easiest to lay on my back when lighting the cursed thing.

The Bug That Used To Live In My Heater 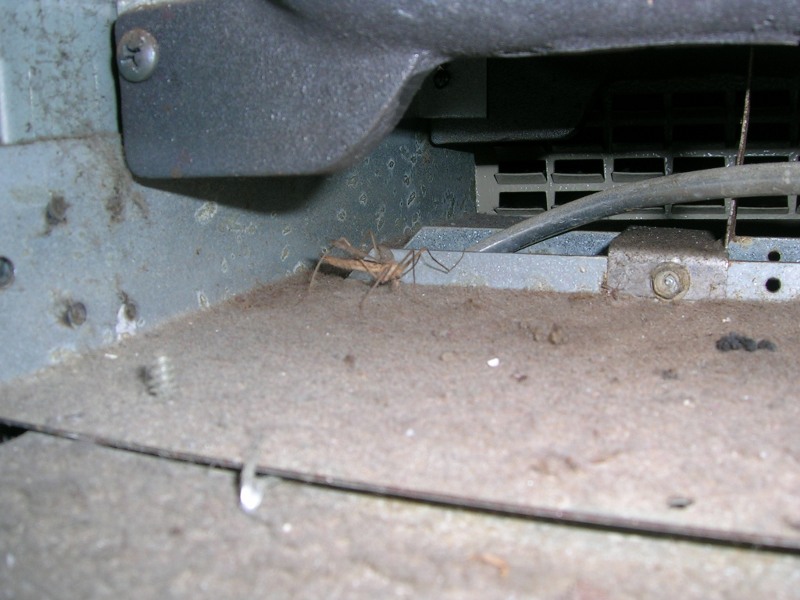 (When I first moved into this apartment from Mexico, I spent the first night without matches or a lighter and therefore no heater because the pilot was out. I had a blow up air matress and two thin blankets -- what a night that was.)

Well, some time ago, I noticed the critter at the right while lighting the pilot. At first, I was creeped out and hesitated putting my hands anywhere near the thing -- was it a brown recluse spider? Would I be poisoned if it suddenly leaped at me and bit me? Eventually, I clued in that it rarely moved. I couldn't tell if it was getting bigger or not. Maybe it was growing? I couldn't tell for sure. How was it eating? Did all the little bugs that wandered within its grasp end up as monster bug food? I left it alone out of a combination of fear and respect.

I've recently come to the conclusion that the thing has been dead all along. I believe that it must have crept in there at the end of winder this year and then this fall, was killed when we turned the heater on for the first time. Still, I leave it alone. It isn't hurting anybody and I still hesitate to get near it, even with the "new" used electronic bug swatter I picked up at our office's white elephant Christmas party this year. It is probably just a dessicated husk at this point -- the heat from the flames above it have sucked all of its life out, I am sure.

Doug Seifert: A Compendium of Stuff. Random thoughts, ramblings, code and other stuff by an experienced software engineer and architect specializing in ruby, rails and Java web and server side development.