Around 2:00 AM last night, like clockwork, our little chihuahua Flaco bolted out of the bed to go yap at shadows in the back yard. Yes, he sleeps with us, but it's not so bad if he sleeps through the whole night. When we first got him, he would stay in bed and was pleasantly warm even though his little body is so small. And he seems to like being squashed a little by us as we sleep. 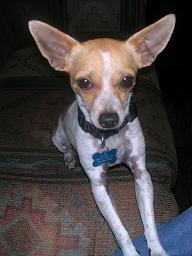 However, about 6 months ago, he started this annoying habit of shooting out in the back yard every two hours through the dark period. He would go out and bark for about five minutes, as if trying to commune with what little wolf blood he has left in him. Then he would come back proud that he had vanquished the shadows. It never bothered him that two hours later, the shadows would have to be vanquished again.

Last night was different. It started out the same, off bolted Flaco to bark impotently at the shadows. Instead of just barking, however, it sounded as if he was chasing something, growling ferociously. Suddenly, there was silence. The silence lasted for several minutes and was long enough for me to sink blissfully back to sleep. My bliss was short lived, however. Because Flaco came back. And, christ how did he stink!

I was awoken by a hammer blow to my nostrils. It wasn't the attenuated odor of skunk you are used to from humid summers as a kid. This was an assault of the nasal cavities which instantly caused my sinuses to clog. This led to instant sinus headache. I tried to hide under the blankets, but it wouldn't go away. My wife ordered me to remove the foul thing from the bedroom and bathe it. Which I did, but of course it did no good. This morning, the odor still lingers and my head is pounding.

Flaco has lost much of his strut this morning. He is quiet and reflective, but I know this is a temporary state. He is not quite intelligent enough to learn from past mistakes. I'm sure in a few days he will be back to his two hour schedule of barking at the shadows. I just hope the skunk exhibits his superior intelligence and stays away.

7/17/03: My friend Donnie sends a recipe to remove skunk odor from pets.

Doug Seifert: A Compendium of Stuff. Random thoughts, ramblings, code and other stuff by an experienced software engineer and architect specializing in ruby, rails and Java web and server side development.